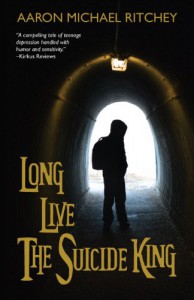 I just completed one of the most engaging reads of recent months: Long Live the Suicide King, by Aaron Michael Ritchey. It opens with 17-year old JD, who is troubled by an event that transpired just days prior while with his friends and under the influence of drugs. JD decides to leave behind those friends and to go straight. But then, not wanting to face the difficulties of life or the knowledge that death will come to him one day anyway—and probably after a prolonged and painful disease as happened to his grandfather—JD decides he will either commit suicide or instigate an event such that someone will do the deed for him. All JD needs is a plan, time to dispose of his worldly possessions, and a note to leave behind. When others at school learn of his intentions, JD is dubbed “the Suicide King.” But then unexpected things begin to happen.

The beauty of JD’s story in Long Live the Suicide King, is that JD discovers more about life and about himself with each passing day. He comes to appreciate that to commit suicide would be to take the life of someone he does not even know yet, someone still in the process of becoming who he will one day be, someone who will continue to change as time moves forward. When JD befriends an old woman and neighbor, Inga Blute, he discovers from one who has experienced extreme violence, that every moment of life is one to guard and savor.  With insight from friends, Marianne, the “model” Christian girl who it turns out has problems of her own, Cathy (whom JD nicknames “1066”) who, though an outcast, is enormously talented and a big dreamer, and Ray, a former drug dealer who decides he can begin his own life anew, JD hovers between the darkness of despair and the light of a new life.

Aaron Michael Ritchey tells JD’s story with compassion and with a unique voice that shows itself most notably through JD’s sarcastic, humorous bent. Indeed, Ritchey’s voice is one this reader most certainly will want to read/hear again. When push comes to shove and JD thinks his life most surely is lost, he discovers all the things worth living for—and they are simple things, like “the way girls smell.” Long Live the Suicide King is an engaging, thought-provoking read, particularly worthy of the attention of anyone who has ever engaged dark suicidal thoughts and/or of anyone who has ever encountered someone who has done so. Hard to put down, Long Live the Suicide King, is thoroughly satisfying.