Who is Fair and Who is Foul? 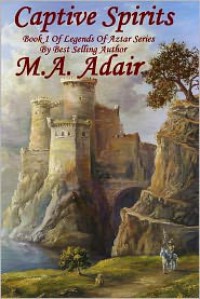 I was provided a copy of Captive Spirits by the author in exchange for my fair and honest review.

Mary Adair has presented, in Captive Spirits (Book 1 in the Legends of Aztar Series), a tale for young adults. Seeking to save the Books of Zmeria, as the castle around him begins to fall, Volcum Ryasi knows that what he is about to do may determine whether his people will one day reclaim Aztar. He makes provision to save the scripts, then carries the queen and her young babe to safety, only to discover later that the people have suffered the loss of their king. Thus, a new king must be chosen, one capable of reading the Zmeria records, and a new home must be found. In the quest for a new land, the survivors pass through caverns through which the evil ones may not go. So opens Captive Spirits with a 2000 year old history of the people of Zmeria.

Si Volcum, the King of Aztar, has problems. He and his infant son, Lyon, are kidnapped, leaving behind, Si’s wife, Alexis and their daughter, Cordea. When Si tries to break for freedom, he is severely injured and left for dead, and his son taken. In the quest to find Lyon, Volcum is befriended by locals who become like family to him. Meanwhile, having lost all memory, Alexis is left behind, unsure of whom she may trust, as a result of which she and Cordea become pawns of betrayers.

Mary Adair offers readers a story filled with love for family, sacrifice for the sake of seeking freedom and insight into the consequences of betrayal. Perhaps most significantly, Adair has created a full new world, complete with its own history, religion, government system and social mores. Added in are magical creatures and trinkets. As all fantasy aficionados know (whether readers, writers, or both), it is the creation of an alternate world that is the most important—and the most difficult—thing to do in a fantasy tale. Adair has done so while providing a story that will keep readers moving forward in their quest to discover who is fair and who is foul. . . .

Also posted at Amazon, Barnes and Noble, at www.Oathtaker.com, and on GoodReads.