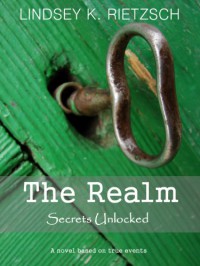 Previously posted in the nearly identical form at www.Oathtaker.com, on GoodReads and elsewhere.

I received a copy of The Realm when it was promoted as a (temporarily) free download on Amazon.

Though "classified" on Amazon as Fantasy, The Realm is not what I would include within that classification—both because the author says the story is based on true events—and because I would classify it as a Christian read, no more or less. That is not a fault by any means—it is simply the case—and I think, particularly when readers pay for a download, that they should rightly know what they are getting.

I did have some issues with the characters and relationships inThe Realm. For example, I found it hard to believe that a man as difficult as Celeste’s father, a man only concerned with outward appearances and what the community might think of him or his family, would turn around after a single session with a counselor. Likewise, how could it be that a young man like Wes could have so many chances to get things right, yet could continue to fail to use good sense (hanging out with Oakley, the events at the party, telling Oakley—who was not a friend of Celeste—private information about Celeste, etc.), while Celeste would continue to look beyond those failings? Then, in light of all of that, why would Celeste think it her fault that Wes is hurt? Because she sent him away? I understand Celeste wanting to learn to forgive, but was she supposed to allow Wes to mess up and then be prepared to accept the blame? Was that to be the pattern for her life? Finally, in light of all of Wes’s mistakes, why would Celeste so readily accept Wes’s proposal? Because Wes was fool enough to propose in public and Celeste did not want to refuse him publicly? (This reader thought so.)

Having said all of that, The Realm had some shining moments. Specifically, there were some real life truths and wisdoms presented, such as when Celeste came to the realization that while her parents were not perfect—neither was she. Another example was when Celeste followed Ezra’s advice and asked her mother—in an effort to better understand her—what it is like to be a mother. The story that Celeste’s mother told Celeste in response, of events from days gone by, was one of the most moving moments in The Realm. Also, I very much enjoyed Celeste’s grandmother and her relationship with Celeste. Finally, the friendship between Celeste and Gia seemed genuine and was believable. All in all, I have no doubt that there is a significant audience for The Realm.