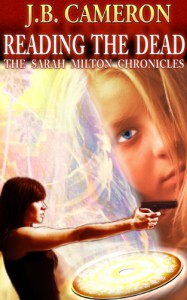 I was provided a copy of this book through Goodreads’ READ AND REVIEW program in exchange for my fair and honest review. I thank the author for this opportunity.

Where to start with this story? Well, I suppose I will begin with the simple statement: I really enjoyed this read! Although the story does not fall within my usual genre, it is not a genre I would shy away from. Still and all, most paranormal stories I’ve read in the past that have included “spirits of those who have gone before,” have been rather dark, foreboding. Sometimes, they make the hair on my arms stand on end or I get that creepy “is somebody there watching me?” feeling. Not so with Reading the Dead. Quite the contrary, in fact. That is—I laughed—frequently!

Sarah discovers an “imaginary friend” as a child, a friend that makes Sarah stand out—and not in a good way. That friend, was the lost spirit of a child, whom Sarah dubs “Anna Nigma.” (An enigma! That’s funny! Or, was it Anna Nimity? Or, Anna Nonimus? Great stuff, Cameron.) It is not until Sarah’s mother’s death that Sarah loses this sidekick—for a time. Anna shows up again after Sarah has a brush with death.

What I am next going to say will probably anger a few folks, but here it is: I have grown weary of fragile, witless, whiny, female lead characters—more often than not—though by no means always—written by men. (In fairness, I suspect men fairly frequently find fragile, witless, whiny male lead characters written by women—and I imagine they tire of them as well!) BUT—Cameron’s creation of Sarah has helped restore my faith that it can be done!

As to little Anna, she is the quintessential sassy child—a little too young to be independent—but old enough to have something to say in nearly every situation. Anna’s antics seemed very real to me.

I enjoyed Cameron’s word pictures and his ability to make his characters “real.” We learn that as a child, Sarah had “eventually learned to mimic [Anna’s] knack for blending into the background.” (A ghost with a knack for blending into the background! Ha!) Together, Sarah and Anna “grew up,” though Anna never aged a day. As to Sarah’s relationship with her father, things had never been good. Indeed, after the wake and funeral of Sarah’s mother, Sarah’s father made his way through the room with a “practiced politician’s fashion,” barely noticing Sarah. Thus, “[i]t was the most alone [she] had ever felt in a crowd.” Even now, years later, Sarah’s father cannot even seem to remember Sarah’s birthday. . . .

But, Sarah is made strong through her troubled years and experiences—strong and smart. She is a well-known criminal investigator for the LAPD. It is when Sarah is on the job that we meet more interesting characters, including Detective Chelsea “Kandy” Kane, a former-porn-star-turned-detective, Commander Mason Childs, a man so tall that every time he stood over Sarah, he “eclipse[d] the sun,” and Lieutenant Carmine Delgado, a man who did not get along well with others. Indeed, Delgado “stepped on more toes than a three legged ballroom dancer.” We read of a rookie who, unable to stand the sights at a murder scene, earns the moniker “Sir Pukes a Lot,” (even while Sarah, before entering that same crime scene, dons rubber gloves that are referred to as her “party favors”), and so on.

Truly, Cameron brought genuine humor to this story—humor that was not forced but natural, relating to all of the characters—even to Bosco, Sarah’s dog. (Sarah thinks she might go back to the pet store to see if they will take trade-ins. She’s not sure she asked the clerk for a puppy, but she is certain she had not requested “a furry demon.”)

Now and again, a reader comes across an indie-published work that makes that reader think: I sure hope some literary agent didn’t pass on this because if so, that person should be kicking himself! Reading the Dead is one of those works.

Well done, Cameron! If you ever need another work reviewed—let me know!

Previously posted in the nearly identical form at www.Oathtaker.com, Goodreads, Amazon, Barnes and Noble and elsewhere.