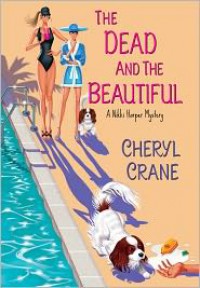 In The Dead and the Beautiful (a Nikki Harper Mystery), Cheryl Crane reacquaints readers with Nikki Harper, the daughter of a famous movie star from the golden days of Hollywood, Victoria Bordeaux.  The story opens when Victoria hosts a garden party.  There, Nikki meets “Disney’s Fab Four,” young stars who had made it big a few years earlier when they co-starred in a Disney sitcom.  When Ryan Melton, the husband of one of the Fab Four shows up dead a short time later, Alison, the sister of Nikki’s love interest, is accused of the murder.  Nikki follows the clues to uncover the real culprit in an attempt to support Alison in much the way that Victoria had supported Nikki years earlier when Nikki herself had been accused of a murder.

As the daughter of Lana Turner, Cheryl Crane is uniquely qualified to tell the story of an adult child of a Hollywood star.  With a “smile” ingrained in Nikki since childhood—one that is not fake, just “rehearsed”—Nikki is at home among the rich and famous.  Readers will enter Nikki’s world, as Crane surrounds them with designer handbags, shoes and clothing, posh and beautiful homes and home furnishings, and Hollywood’s elite, in The Dead and the Beautiful.  In the midst of this world of wealth and fame, Nikki befriends people who, enamored with the fame of her mother, are eager to assist Nikki as she attempts to solve the mystery.  All the while, readers will be drawn closer and closer to the ultimate question:  will Nikki identify the real murderer before she becomes the next victim?