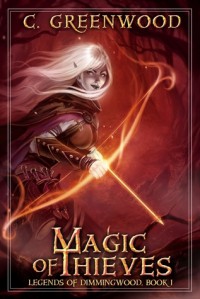 I received a free copy of Magic of Thieves from Amazon.com when the author offered a free download. In exchange, I offer this, my honest review. I thank the author for this opportunity.

There seems to be a “conventional wisdom” out and about, regarding how authors should keep their works within a certain length—a limited word count. I do not subscribe to that particular thought. The truth is that when I start with a work, my goal is not to finish it. What I really want is to find a work that I don’t want to see come to an end. Too often, I think books stop short, or do not flesh out the details that would make the story more complete, all in an effort to stay within some pre-ordained word count. To me it seemed Magic of Thieves fell into this trap—which really meant, among other things, that I found the plot was not fully formed and the ending was not entirely satisfying.

For the most part, Magic of Thieves was engaging and well-written—but, I wanted more. I wanted to know more about Ilan’s background and thoughts; I wanted to know the significance of the flashback she experienced to an event with her mother; I wanted to know why the brooch Ilan received from her mother was important; I wanted to know more about the bow Ilan discovered; I wanted to know if Ilan would outgrow some of her pettiness and become a young heroine of the sort that I could really like. Most important, I did not want to find the story end at “a resting place” when, for the most part, I felt the story had only just begun. . . . Sure, this is the first in a series, but for this reader, each work should stand compete in and of itself. I do not want to have to purchase “Volume Two” in order to get a satisfactory result for the questions remaining from Volume One. It is okay that there are questions remaining—they just should not be of the sort that leave me hanging on the edge of a cliff. . . .

Magic of Thieves opens with a great action scene that leaves Ilan an orphan. Through a series of events, she ends up living with a group of outlaws who dub her “little dog” because of the way she follows Brig, the man who saved her from certain death. This nickname is referenced repeatedly throughout the story, which made for some interesting exchanges (like, for example, when Hand, the leader of the outlaws, suggests that Ilan would have been better called “a little rabbit,” since “she has all the pluck of one”).

I found inconsistencies in Ilan’s relationships with Brig and also with Terrac. At times it seemed, within a single paragraph, that Ilan confirmed both that she wanted nothing more to do with the other person and that she did not want to be without the other person. I also found the timeline a bit off. Ilan arrives at the brigands’ camp as a young child and not long later it is determined that she is to study with Terrac to learn to read. Then, suddenly, Ilan’s fourteenth birthday has come and gone, yet her studies seem to have only recently begun. . . . (Perhaps I missed something?)

Greenwood offers readers some bits of wisdom, such as that learning can be joyful; that one cannot always be particular about what they learn or where; that one does not want to be handed a victory, but to earn it; and that it is difficult to stand up for someone who will not stand up for himself.

All that said, my rating for Magic of Thieves in based on my overall enjoyment of the work, the author's creativity/originality and the the author's voice/flair for storytelling. This was an enjoyable read—my main criticism being that it stopped short—at (in the author's words) "not [the] ending, but a resting place."

Re-posted from www.Oathtaker.com.  Also posted on Goodreads, Amazon and elsewhere.