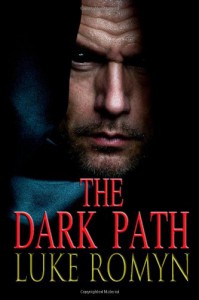 I received a free copy of The Dark Path from Amazon.com when the author offered a free download. In exchange, I offer this, my fair and honest review. I thank the author for this opportunity.

I rate A Dark Path in three areas: (1) My overall enjoyment; (2) Creativity/Originality; and (3) Voice/Flair for Storytelling.

For me, The Dark Path was indeed—dark. I almost quit reading several times because of the jarring nature of some of the scenes. If you have no stomach for violence—particularly that directed at women and children—you may way to stay clear. Even so, I was grateful the author did not go into excruciating detail in those scenes—it was disturbing enough, knowing what was happening, without the gory details. So, I read on, and in so doing, I found a truly unique urban fantasy thriller.

After Martin Roberts is unable to stop the murder of his partner and closest friend, he is scheduled to testify at the trial of the syndicate responsible for that murder. In protective custody with his wife and daughter, Martin, goes off one evening in a fit of temper. Tragedy ensues, following which, Martin’s entire persona is changed.  He becomes Vain, the Dark Man, an assassin who brings justice to those in the criminal world. The man, Martin, all but ceases to exist. Or does he? When pegged as the only person who can save a young man who Martin/Vain doesn’t even know, Martin/Vain rises to the challenge. Yes, it seems it was a part of the personas of both Martin and Vain responsible for saving Sebastion, the Avun-Riah. Without the heart of Martin, hiding somewhere deep inside the Dark Man, Vain’s effort to save Sebastion would not have been made; without the Vain’s wherewithal, the efforts to save the Avun-Riah would have proven futile.

The Dark Path introduces interesting characters—most notable for this reader—Squirrel and Priest, and tells of angels and demons—all the while leaving the reader to wonder a bit which are which—and perhaps whether it even matters. But, the thing most missing for me in The Dark Path, was a character that I liked. Martin/Vain may have been the “hero” in some strange way—he was certainly mouthy and brash (and delivered some good lines in the process)—but I never liked him—even when he went the extra measure to do good. I kept thinking, hoping, that some part of him would become likeable, but that did not come to pass. Thus, for me The Dark Path was a worthy read if not exactly an “enjoyable” one.

Also posted at www.oathtaker.com, on Goodreads, Amazon and elsewhere.