How Clever is That! 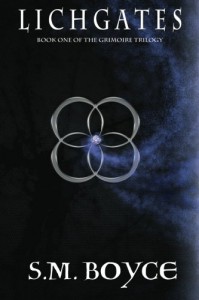 I received Litchgates as a free download on Amazon. In exchange, I offer the author this, my honest review.

Note the terrific new cover for this book:

I open by saying that I was torn between 4 and 5 stars. The reason for this was that I had one fairly significant issue with the story, against which I had to weigh another truly significant bonus for the story. In the end, though BookLikes allows me to post half stars, I decided that I had to go for posting 5 stars!

Litchgates opens with Kara finding her way upon an unkept trail in the Rocky Mountains. There, she has been vacationing with her father, even as the two continued to mourn the death, months earlier, of Kara’s mother—a death for which Kara feels responsible. Coming upon a gate, Kara enters, and is delivered to another realm—a realm of unusual creatures and, of course as fantasy requires—magic, a world wherein Kara becomes the new and long awaited Vagabond.

The downside for me with Lichgates, was that, while I was convinced of Kara’s mourning for her mother, as the story proceeds, Kara also finds herself witnessing her father’s death. Somehow, what I expected would bring deep emotion from Kara seemed to be a bit missing. Indeed, she seemed to think upon her emotional trials only intermittently and then not wholly convincingly. I also found that Kara’s connection to Braeden was not entirely convincing—and truth to tell, I didn’t like Braeden all that much either.

All that said, however—and this is a BIG however—Lichgates deserves 5 stars because—well, because it was so very original! Boyce’s imagination is incredible! She created a believable, truly unique alternate world that is internally consistent (no small task as any fantasy writer will tell you!), complete with the leaders of each of the kingdoms (known as the Bloods), the manner for passing the power from a Blood to his Heir, the very color of blood that the different kinds of peoples had, the small creature, Flick, that Kara hatches from an egg, and so on and so on.

Boyce engaged my senses of sight, sound, smell and touch. She delighted my imagination with unusual creatures, such as the soul thieves, the yakona, the shape-shifters, the isen, and more. Boyce created interesting word pictures and offered unique descriptions (“fitful butterflies dancing a tarantella,” or “hundreds of crooked teeth hung far beyond its lips like rusty knives,” or “a barn that was leaning on its last, crooked legs,” by way of example).  She offered unique insight (such as, by way of example, “he drew out his vowels and overly enunciated his consonants, as if pausing to adore the sound of his own voice,” or “her voice bounced and echoed, forcing him to relive the same words many times”). Boyce even made me laugh out loud from time to time, such as when “one of the stones even took on the shape of her face while she stared at it. It stuck out its tongue, the small heap of rock gliding out with the grate of stone scraping brick, and the stony face blew an inaudible raspberry.” (Really!?How clever was that!)

In the end, the questions for me are always—would I go back for more? Would I recommend this read to others? The answers to those questions are a resounding “YES!” and thus, my 5-stars!

Also posted on www.oathtaker.com, my Facebook page at www.Facebook.com/PatriciaRedingAuthor, on Amazon.com and on Goodreads, Tweeted and pinned the cover on Pinterest.